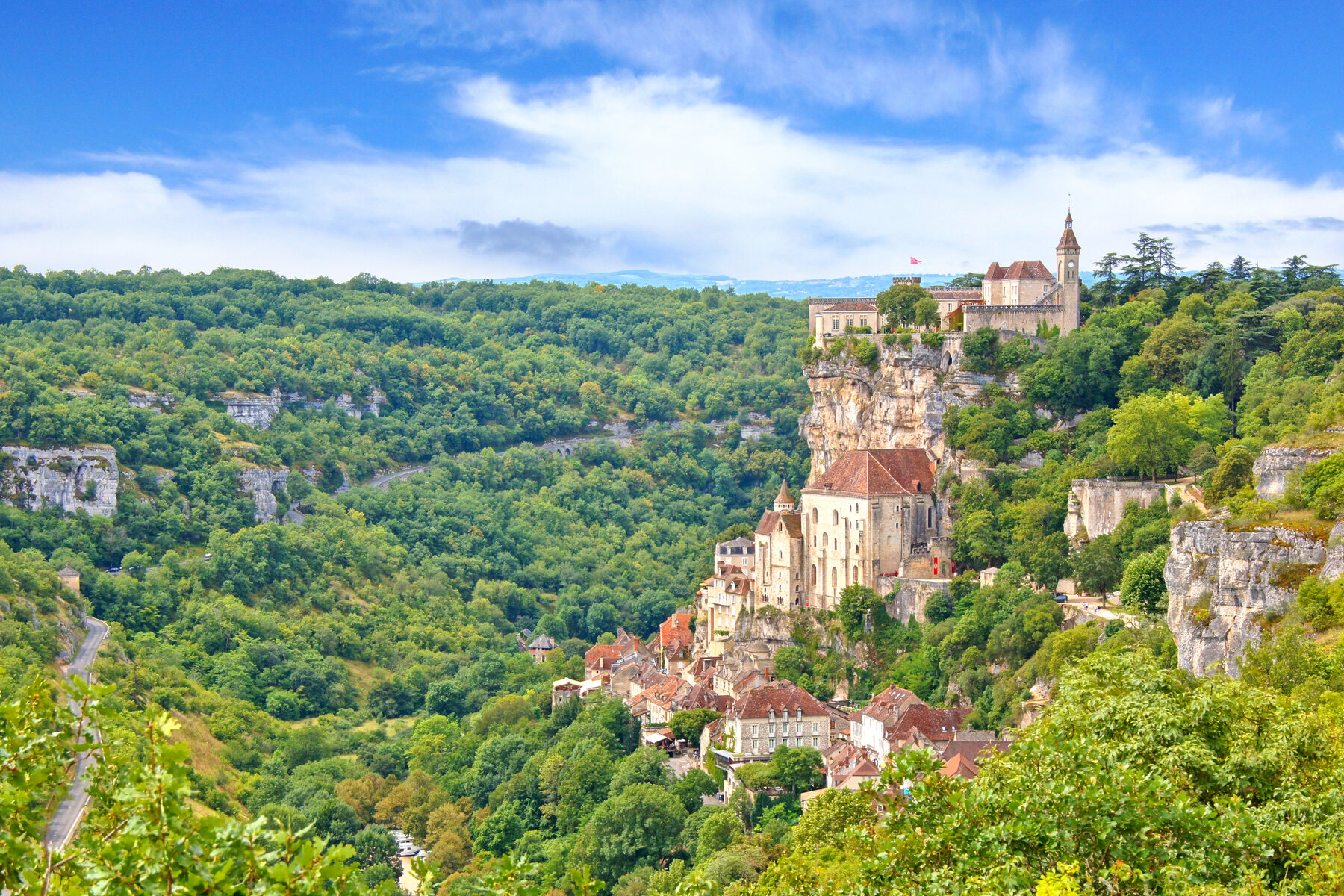 Rocamadour proudly presents itself as the “second site in France”, after Mont St-Michel. The two share extraordinary and fantastical settings, the very kind of naturally sacred places that attract legends like lightning rods. Rocamadour is the medieval French equivalent of a Pueblo village in North America, a vertical town of cliff dwellers, the beautiful golden stone houses and chapels stacked on top of each other above a deep ravine, while far, far below the small Alzou river continues its work of eons, digging even deeper into the gorge.

What to see and do in Rocamadour

Pilgrims would enter Rocamadour by the 13th century Fig Tree Gate, one of the four gates that defended the only real street in the village. Once inside, after a slew of souvenir shops, you will find a second door, Salmon Door (and the lift to the Holy City). Beyond is the 15th century Palais de la Couronnerie, now the City Hall, where a beautiful tapestry of local flora and fauna by Jean Lurçat is exhibited. The street continues through another door in the Coustalou districtthe prettiest and least restored part of the village, with its fleshy little houses and its fortified mill.

From Place de la Carretta, the grand staircase, the 216 steps Grand Staircase, led into the holy city; pilgrims still sometimes climb them on their knees. The first 144 steps lead to the Senhals Squarewhere merchants sold holy medals (senhals in Occitan) in lead and stamped with an image of the Virgin.

The oldest street in Rocamadour, Mercerie Streetextends from here, with the fourteenth century Pomette House at its end. From there, continue through the door under the over-restored Strongformerly residence of the bishops of Tulle.

At the top of the Grand Staircase, this small square is the center of the holy city, where pilgrims could visit seven churches, like in Rome, but in a very abbreviated space. today only Our Lady and St. Saviour are open; for St-Michel, SS Anne and Blaise and L’Hospitalet and the Crypt of Saint-Amadouryou have to follow the guided tour of the tourist office.

The 11th century Saint-Sauveur Basilica makes good use of the cliff for a wall. Above the altar hangs a 16th-century painted wooden Christ crucified on a tree, its right side instead of the usual left pierced by the spear. Steps lead to another of the seven churches, the 12th-century Mere St. Amadour Crypt, where the relics of the holy hermit were venerated. The Parvis also has the Treasure of Sacred Art Museum (closed except on special occasions) dedicated to composer Francis Poulenc, an atheist who converted to Catholicism after a vision here in 1936 and composed his Litanies to the Black Madonna of Rocamadour. Inside, precious medieval reliquaries from Limoges, stained glass windows and ex-votos from the 17th century.

On the other side of St-Sauveur another 25 steps lead to the church of Our Lady and flamboyant gothic Chapel of Our Lady. This dates to 1479, after a boulder crashed into the cliff through the original shrine. Inside, the miraculous Black Virgin holds court. Carved from walnut in the 11th century, she sits stiffly on her throne, almost a stick figure, with the Christ Child balanced on her lap. Ex-votos testify to its celestial influence: many are Breton sailors saved from shipwreck after having prayed to the Virgin of Rocamadour – including Jacques Cartier, who returned safe and sound from his three voyages to Canada. Miracles were often heralded by the ringing of the ninth-century bell hanging from the roof. The chains of the pilgrim petitioners still hang at the back of the chapel. Outside, high in the rock above the door, Durandal is still embedded in stone, tied by a chain to keep it from falling on someone’s head.

Sharing this high place with Notre-Dame is the Chapel of St. Michaelwith the overhanging cliff for roof, decorated on the outside with colorful 12th or 13th century frescoes depicting the Annunciation and Visitation. The patron saint of travellers, St Christopher, is painted below; catching a glimpse of him was good luck, so he was always made very tall. Nearby, nestled in the rock is the new chapel – at Our Lady of Ovalie (i.e. rugby!) Higher up, a hairpin path lined way of the cross (or the much easier lift from the Parvis de St-Amadour) takes you up to the 14th century ramparts castle (2€ for a dizzying view) and L’Hospitaletthe district named after an inn-hospital founded in 1050 by Hélène de Castelnau for pilgrims en route to Compostela.

The eagle’s nest atop Rocamadour does exist thanks to the breeding program for endangered raptors (including a condor) and parrots from Costa Rica. Seeing them soar above Rocamadour is quite impressive, and you can visit them all before or after the show. Try to go to the last show, when the owls come out.

If you come by train, Rocamadour is 4 km from the station; book a taxi to meet you.

Only the cars of visitors who have booked in the hotels of the village are authorized. In July and August, the nearest car parks in front of the gates fill up quickly, but there are always places at the bottom, where a small train runs every 15 minutes between the valley car park and the Medieval City. Or park at P2 in L’Hospitalet, the upper district of Rocamadour, where you can walk down to the medieval Cité Médiévale – the steps are not steep but there are 223 – or take the two public lifts up to the level of the shrines.