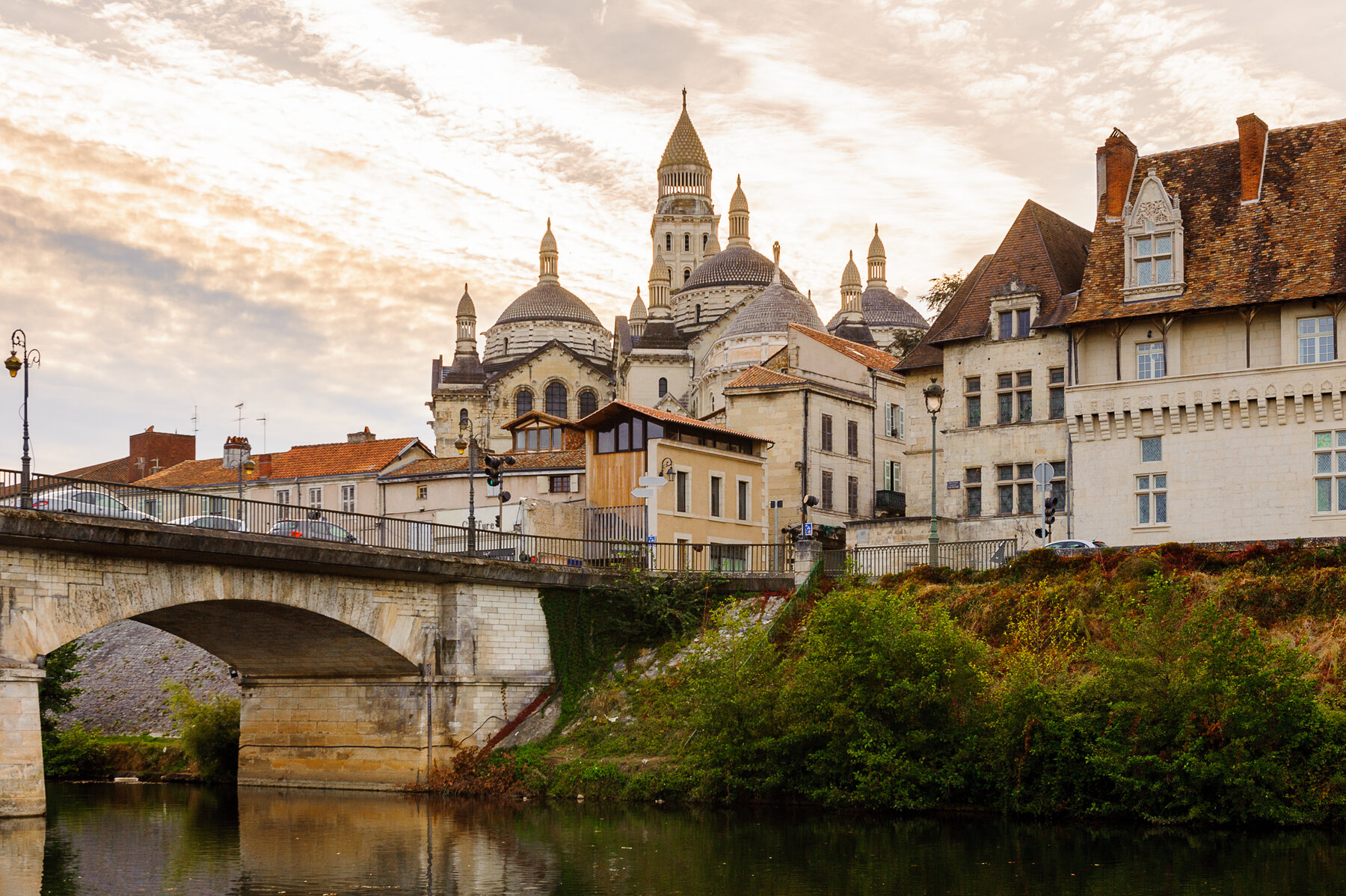 Located in a privileged and fertile valley on the Isle river, the capital of the Dordogne department is a cheerful city of 31,600 inhabitants which prints all the postage stamps of France. The old streets around its famous five-domed cathedral have been cleverly restored to give the city a lively and charming heart. Another plus is two excellent museums, old and new, offering a chance to experience what life was like here in the days of Asterix.

To see and do in Perigueux

It is the fourth church built here, at the top of the Puy above the island. A 6th century AD chapel containing the relics of St Front was replaced in 1074 by a much larger church, to attract pilgrims on the Camino de Santiago. In 1120, when this new church burned down, it was decided to build something extraordinary with five domes on a Greek cross, similar to Saint Mark in Venice. In the 19th century, this marvel was a rickety disaster waiting to happen. After the Huguenots damaged it in 1575 and destroyed the tomb of St Front, a series of thoughtless restorations exacerbated the typical problems of old age.

Of Place de la Clautre you can see what remains of the church from 1074: the austere facade fitted with the strange Roman fragment, the side walls which now form an open courtyard, the lower two thirds of the 57m square bell tower, built in a unique style for the Middle Ages which may have inspired Abadie’s eccentricity. There are two confessions (tombs of the holy confessors) – one under the bell tower and the other under the western dome – and the small cloister with a “pine cone” in its center, a copy of a common Roman motif ( the famous Vatican in a courtyard), which originally surmounted the bell tower.

The north door of the cathedral opens onto Avenue Daumesnil, the center of a fascinating network of pedestrian streets from the 15th and 16th centuries. Much of the stone in their townhouses was quarried from ancient Vesunna, and residents often leave their doors open to let passers-by admire their curving interior staircases. The Old Mill, perched on a river wall on Boulevard Georges Saumande, is a vestige of the grain monopoly once held by the canons of St-Front. Just down the street, the 15th century House of the Consuls, the former seat of the city’s government, reflects the golden age of the late Middle Ages and the Renaissance in Périgueux; there are fine views of the set on the willow banks of the Isle from the Barris Bridge.

Go up to Place Daumesnil, enter the picturesque Daumesnil Galleries via rue de la Clarté: this is a set of old courtyards open to the public, and named after Pierre Daumesnil, born at 7 rue de la Clarté in 1776. Long narrow pedestrian path Limoges Street has been the busiest shopping street in Périgueux since the Middle Ages and is lined with Renaissance houses; nope. 5, the House Estignardis particularly charming with its skylights, its mullioned windows and its sculptures of salamanders, a way of flattering François Ier of whom they were the emblem.

In pretty St. Louis Square surrounded by restaurants and cafes, the Pastry Chef’s House (1518) has a carved porch and an inscription warning that anyone who speaks ill behind people’s backs is not welcome inside, for “the greatest glory is to displease the wicked”.

Museum of Art and Archeology of Périgord (MAAP)

This museum has something for everyone. The important prehistoric section has one of the oldest complete skeletons ever discovered, Neanderthal man dating from 70,000 BC. Regourdou’s man. There are Upper Paleolithic carvings and carvings in bone and stone, among them the strange, disembodied Bison Parade of Chancelade and a disc sculpted with hinds.

Millennia later, there are Gallo-Roman jewelry, domestic objects and mosaics, an Alemannic sword, Visigothic and Frankish blades, a Visigothic sarcophagus from the 6th century, a fragment of lacework from a Carolingian choir, and strange faces and messy sirens that once adorned St-Front, a jewelry box that belonged to the Fénelon family, and ceramics and enamels from Limoges.

The paintings are not overwhelming, but there is the Rabastens Diptych (1286), a rare work painted on Toulouse leather, a Canaletto and Dutch works, and works by Périgourdins from the 20th century, including sculptures by Jane Poupelet. Much of the ethnographic collection (from New Caledonia, the Cook Islands, Papua New Guinea and Africa) was brought back by Admiral Bougainville, who sailed around the world in 1768 for King Louis XV and introduced Europe to the flowers that bear his name, along with masks, idols and other art objects, including a 5m shell necklace used as currency.

According to ancient writers, this fantastic ruin once stood in the exact center of Vesunna, in the middle of a peristyle square. It was the temple of the city’s patron deity, a dark Celtic goddess who did not like to be named. Today it stands alone in a park, an enigmatic cylinder of stone and brick 20 m high, with its breach attributed to St Front. Imagine this large cylinder as it must have appeared in the Middle Ages, still surrounded by some of its columns.

Note the row of sockets about 6m from the top; beams projected from here to support the cornice and the roof, which would have been domed or conical – recalled in the unique and strange circular lantern at the top of the steeple of St-Front. This is the very image of the Tour de Vésone; this emblematic, almost magical building was still to keep Périgueux under its spell, and the Romanesque builders were finally able to seize it and convert it to Christianity.

The center of the old city is marked by the oldest church in Périgueux, founded on a Temple of Mars in the 6th century. In the 12th century it was rebuilt in a style which became the prototype of the domed Perigordian Romanesque church, with large Byzantine cupolas not only over the crossing but also along the entire length of the nave. Originally, St-Étienne had four, culminating in a huge bell tower-porch; these busy Huguenots, unkindly, and not too cleanly, ripped off the front half.

The two remaining bays are not only an important lesson in the origins of Perigord Romanesque art, but are imbued with a dark medieval solemnity, an atmosphere so absent in St-Front. The first dome, from the early 1100s, is solid and primitive, lit only by tiny windows; the second, around 1160, is elongated, lighter and supported by twin columns.

Inside, the arch of the tomb of Bishop Jean d’Asside (d1169) frames the Romanesque baptismal font and a medieval curiosity: a sculpted Easter calendar from the 12th century. In the days of slow communications, each diocese had to determine the correct Easter Sunday by observing the moon and calculating from a chart like this.

The station (11 rue Denis Papin) is on the TER from Bordeaux to Limoges, via Mussidan and Montpon-Ménestérol and Libourne. It’s 4h30-5h from Paris (change in Limoges), or generally faster by the LGV to Libourne then the TER.

Another option is bus 01 connecting Périgueux (via Brantôme) to Angoulême, to join the LGV Paris-Bordeaux there. Another TER line connects Périgueux to Agen via Les Eyzes, Sarlat, Villefranche-de-Périgord and Monsempron-Libos (where you can take the bus to Cahors).