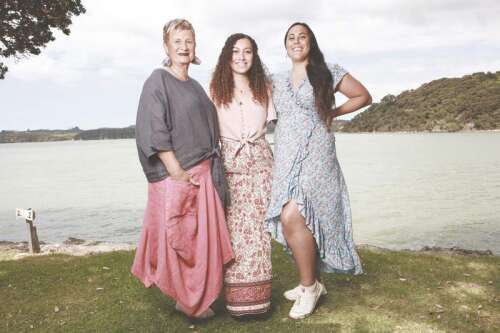 Gisborne, on the east coast to appear in the TVNZ series.

Rusha Paenga, raised in Maraehako Bay, is an experienced world traveler, but quickly developed a taste for seeing what New Zealand has to offer, thanks to her participation in the series.

Ms Paenga, who lives in Napier, her same age aunt Cara Frires-Hei, of Maraehako Bay, and Ms Paenga’s chick, born in Gisborne, Mere Nepia, of Napier, are among five family groups traveling to Nova Scotia. Zealand to bring back and evaluate their Kiwi. experiences.

The Tairawhiti episode will be screened on March 4.

The rest of the series focuses on Northland, Southland, Fiordland, and Auckland.

Ms Paenga traveled through Europe on her own and lived in Valencia and Berlin, but said she had little travel experience in her own country.

“I can’t believe I haven’t done this before.”

It was then decided to shoot a series based in New Zealand, with South Pacific Pictures working with Tourism New Zealand and Television New Zealand.

Mr. Szusterman was part of a group that traveled to New Zealand in search of locations.

They wanted places that few New Zealanders had visited, although Mr. Szusterman had visited Gisborne “a number of times”.

Mr Szusterman said he was impressed with the horseback meditation sessions at East Coast Horse Treks.

He liked to discover unusual attractions for the series.

The Tairawhiti episode captured the spirit of the east coast road trip and the beauty of the area, he said.

He hoped the series would encourage New Zealanders to go out and see their own country and support the tourism industry.

Ms Paenga said her favorite region outside of Tairawhiti was Northland.

â€œI hadn’t been there before.

“It’s subtropical like abroad, but it’s in our own country.”

When asked where she had been in Gisborne and on the East Coast, she replied, â€œyou will have to watch the programâ€.

See the Country: Locally Connected Loved Ones (Left to Right) Mere Nepia, Cara Frires-Hei and Rusha Paenga perform on TV tonight as they roam the country up and down in the new Travel Guides NZ series. Watch out for the Tairawhiti episode, which will air on TVNZ 2 on March 4. Picture provided