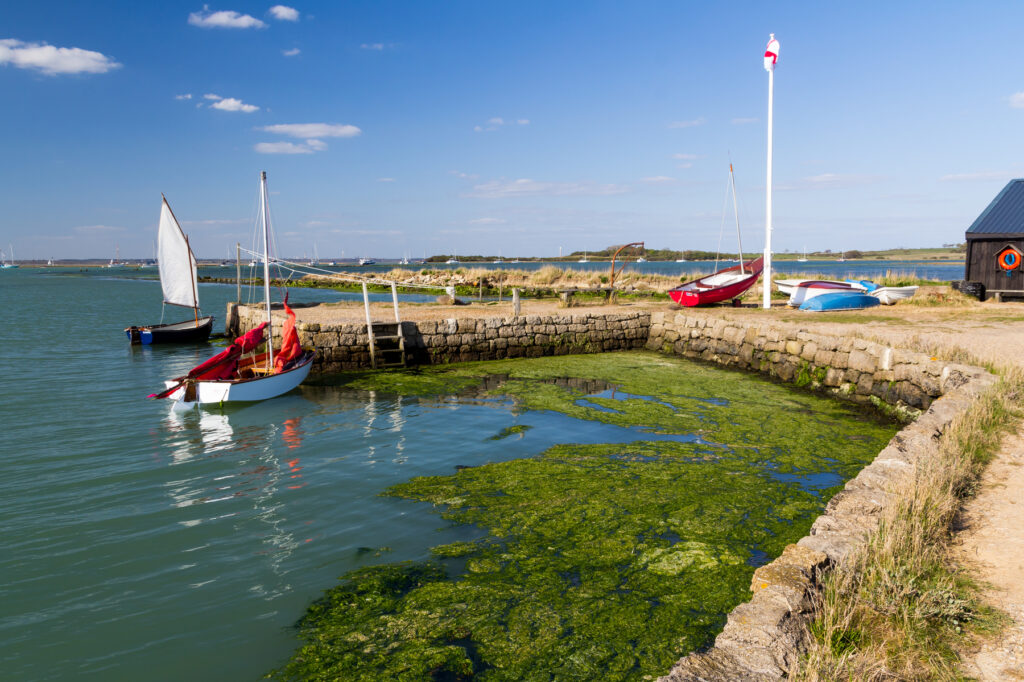 The tiny hamlet of Newtown sits in the heart of a National Trust nature reserve. It is unusual in that it is a rare example of a new medieval town that failed economically due to a combination of plague, changing river flows and those ever-marauding French neighbours. In the early and mid 14th century, Newtown was the most important port on the Isle of Wight – something that seems rather unlikely to the modern visitor – with an oversized town hall the only surviving nod to the old stature of the community.

While Newtown has dried up over the centuries, it has escaped development and regeneration and many of its original greenways and small enclosures have survived, along with a network of grid-like streets radiating from the shore like those of Yarmouth and Newport.

Make sure you don’t miss the old town hall (National Trust), a red-brick house resting on tall pillars and dating from 1659 (although the town gained borough status much earlier, in the 13th century). As Newtown’s stature and importance diminished, so too did the hall’s fortunes, to the point that it became a town hall without a town. In fact, by the end of the 16th century, the “city” had become one of the notorious “rotten burgs”. This shoddy status was removed in 1832 when the seat was abolished by the Great Reform Act.

The town hall was saved from physical collapse in the 1930s thanks to the intervention of the eccentric Ferguson’s Gang, a group of masked women who remained anonymous but devoted their time to raising money to buy property for the NationalTrust. They would burst into Trust meetings and lay a bag of money on the table, Robin Hood style, with strict instructions on how it was to be spent.

Just up the road from the hall, the church of the holy spirit is the epitome of rural idyll, with symmetry in its Gothic porch and arched windows that overlook a lush cemetery. Unlike the hamlet in which it stands, the church offers a relative injection of young blood, having only been built in 1835. Indeed, the church is so beautiful that architectural historian Nikolaus Pevsner l ‘has been described as ‘the finest early 19th century church on the Island’.

A short walk from the path west of the church leads through Newtown National Nature Reserve to the shore; the end of the road is a boardwalk leading to a well positioned bird hide. The lagoon-like waters of the creeks of Newtown Creek were once salt marshes until they were breached by a violent storm in 1954. In spring and summer, the whole area is a delight, fringed with the hue of blue marine aster and marine lavender violet. The adjacent coastal meadows are filled with green-winged orchids and classic hay-meadow species such as the superbly named corky-fruited waterdrop, whose white flowers rest on a 3-foot-tall upright stem, and , in a nod to one of the trades that were once active here, the greenweed dyers (in a confusing yellow color), which were used to dye fabrics.

England’s Coastal Path (a national project) is being implemented on the island and should improve access around Newtown. The existing Island Coastal Path route sometimes keeps the hiker away from the coast, but the improved extensions will provide access to more coast via the hay meadows behind hides overlooking the Newtown Creek and River. In the meantime, you can access more of the coast here via the CB16A trail (near the Town Hall parking lot) which skirts around the south side of Newtown. The coastline is stunning – soft, green hills tumbling towards the foreshore, while the New Forest forms a timber-framed horizon across the Solent.