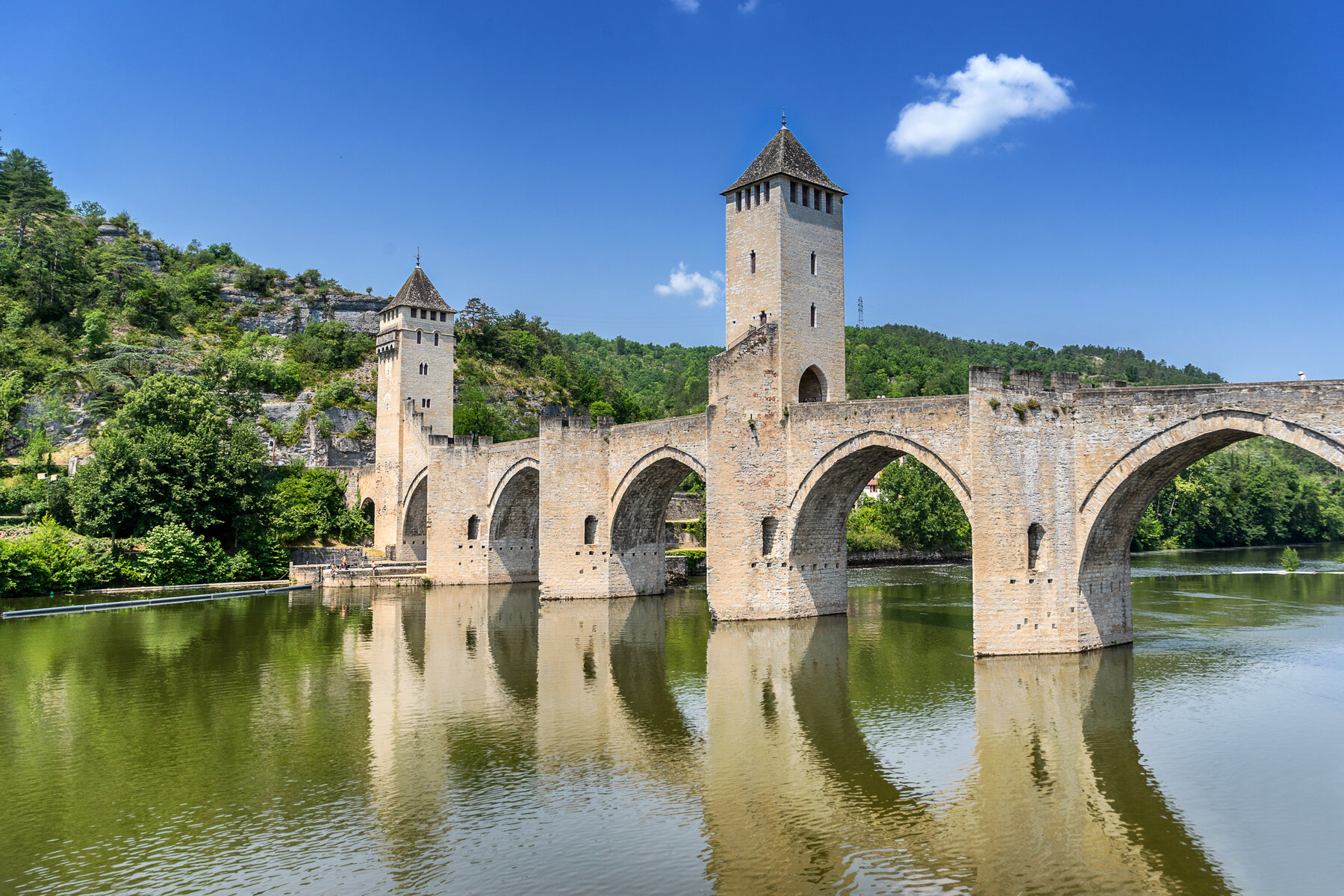 Information and travel guide for Cahors

The immediate surroundings of Cahors are among the most daunting landscapes in all of France. The anomic clutter of the city’s newer parts suits them well, but persevere – in the middle you’ll find a medieval town of surprising subtlety and character. Its star attraction is the Pont Valentré which, as any Frenchman will tell you, is the most beautiful bridge on this planet.

To see and do in Cahors

A canopy of plane trees shades the town’s main shopping street, replacing its medieval walls. Near the tourist office on Place François Mitterrand, a flamboyant as it should be monument to Leon Gambettashows the Republican hero of Cahors pointing dramatically, perhaps accusingly, north toward Paris.

As a lawyer and politician, Gambetta was a fierce opponent of Napoleon III. After the defeat of France in 1870, he declared the Third Republic in Paris, then dramatically escaped the city in a balloon while the Prussians besieged it. After that he raised new armies in the south (although the Prussians also whipped them) and eventually became prime minister; all of France cried in 1882 when he accidentally killed himself while cleaning a rifle.

If you stroll along the end of the Allées Fénelon behind Gambetta, take a look at the beautiful Gambetta College on the right with its octagonal bell tower in red bricks, a survivor of the first Jesuit college in the 17th century. The Alleys are closed by a pretty Fountain of Neptune; turn right here for Rue du President Wilson.

If anything is a sign of opulence in a medieval city, it’s the bridges. Cahors had three, where one would have sufficed, and the two that disappeared, demolished in 1868 and 1907, were almost worth this one. The Valentré bridge survived because it carried little traffic. Begun in 1308 and funded with the help of Pope John, the bridge nonetheless took 70 years to complete. With the Hundred Years War in full swing, it’s no surprise that defense has become the overriding concern. The three towers that look so picturesque are three rings of defense to keep the English out; each had its portcullis and slots for archers and boiling oil.

You can be sure the devil had something to do with it. Here, after working on the project for decades, the master builder struck a deal with Old Nick: if he did whatever the builder told him to do with his supernatural powers to complete the bridge, he would lose his job. soul. After the bridge was completed, the builder tricked him, of course, into giving him a sieve and ordering him to fetch water, but the Devil took revenge by sending a demon to steal one of the bridges. stones near the top of the central tower, which had to be replaced every day. In the 19th century, restorers added the carved stone of a devil to trick Satan into thinking his orders were always being followed.

Medieval Cahors is grouped to the east of Boulevard Gambetta under its mighty cathedral. Begun in the 10th century on the site of the 7th century St Didier church, it is the second of the domed churches of Périgord and Quercy, directly inspired by St-Étienne in Périgueux. Not completed until the 1400s, its western and eastern ends have been completely rebuilt, resulting in quite an architectural bastard, a sort of Romanesque-Gothic sandwich.

The severe facadethe typical wide steeple-wall of a Quercy church roughly, was redone in the 14th century, when the original entrance was moved to the side – then walled up and forgotten until 1840. This, the north portalis one of the most beautiful in the south of France.

In the center, Christ in a mandorla is flanked by angels falling from heaven and scenes from the martyrdom of Saint Stephen; below are the Virgin Mary and ten apostles (there was no room for 12). The borders and modillions are fascinating, with a full set of monsters, scenes of war and violence, and quirky decorative rose motifs that seem to foreshadow the trimmings of the Renaissance palaces of Cahors.

South of the cathedral this was the working-class part of town – although it had its share of palaces, mainly along the Rue Nationale, the main street in medieval times; at its beginning, the Marcilhac Hotel has a beautiful carved baroque door. The narrow streets to the left of Rue Nationale give an idea of ​​the density of urban life in Cahors, with many half-timbered houses and medieval palaces along Rue Lastié; many of them have large pointed arches facing the street for the commercial facades and elegant twin windows on the upstairs family quarters. Another feature is the sunho, a veranda at the top; in Renaissance palaces they are often made of brick arches and called mirandes.

The neighborhood church, Saint Urcisse, stands at the end of rue Clemenceau with a 13th century statue of the Virgin on the facade; if it is open, do not miss the set of capitals carved with tender naive scenes of adam and eve and the Life of Christ. Place St-Urcisse by the river, the hypnotic Ball Clock created by Michel Zachariou keeps time with 54 marbles.

To the north of the cathedral extends what was the district of the rich merchants; soubirous means superior, for the way it rises. His spine, King’s Castle Street, is an elegant street reminiscent of Siena or Perugia. Its most impressive façade is at no. 102, the thirteenth century Grossia Hospital.

In front of the Hospital, the King’s Castle was one of the largest palaces in Cahors in the 1300s, built by the pope’s brother-in-law, but was completely destroyed in the 19th century when the state turned it into a prison; the large keep within, visible only from the riverside, once had a tall chimney as a landmark for river boatmen. It is planned to turn it into a hotel and a cultural centre.

Town is easily walkable, but parking can be a challenge. The city’s bus line, Évidence, offers free shuttles every 15 minutes to the Chartreuse car park just south of the center and the Ludo-Rollès car park to the east; other car parks are at the northern end of Boulevard Gambetta at Place Charles-de-Gaulle and to the south on the Louis Philippe bridge, and in an underground garage called the Amphitheater under the Fénelon alleys as they found the Roman arenas at one end.