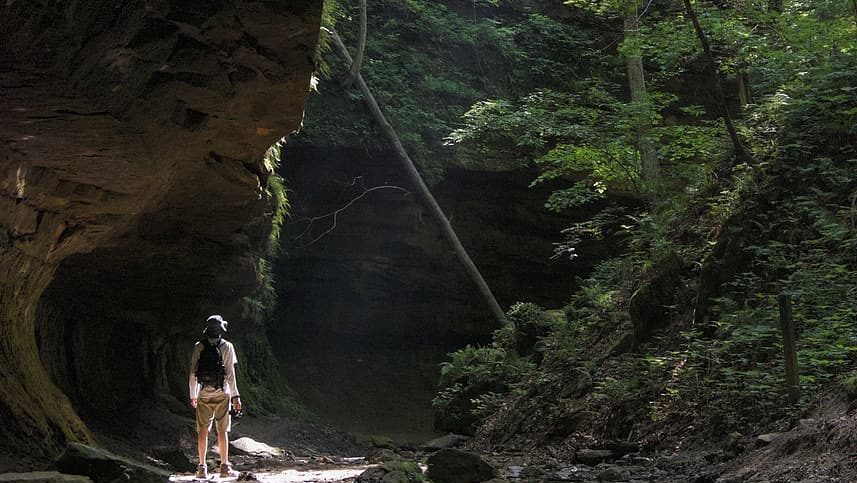 INDIANAPOLIS — With gas prices soaring, many people in central Indiana may be looking for a summer destination closer to home. We’ve looked at six state parks where people can go this summer for some inexpensive fun.

Click on a link to access the state park or scroll down to learn more about these state parks.

The former Citizens Army Camp is preserved around the park office in what was once known as Camp Glenn. There’s also the 20th Century War Park Museum, which features exhibits on the lives and histories of the soldiers who once marched on the grounds of the fort.

A park brochure says the fort represented the first effort to create a national army from a collection of state militias. The post has served multiple roles as a troop reception center, classroom, and soldier support facility during every major military conflict, from World War I to Desert Storm.

Located off I-69 east of Anderson, this park features 10 unique earthworks built by the prehistoric Adena-Hopewell people. The park became a national park in October 1930.

The mounds range from a few centimeters high to several feet high. The largest earthwork, the Great Mound, is believed to have been constructed around 160 BC. It measures nearly a quarter of a mile in circumference.

The mounds are believed to have been used as gathering places for religious ceremonies, from which astronomical alignments could be seen. The positions of 100 of the brightest stars, as well as those of the moon and visible planets, can be tracked from the mounds.

The park offers a variety of activities ranging from a nature center to camping. Naturalist-guided hikes and interpretive programs are offered every weekend throughout the year.

Located near New Castle, this 2,680+ acre park is a destination for anglers, swimmers, bird watchers and wildlife photographers.

The park includes an 800-acre lake, shaded wooded areas, and plenty of open space. MNR has stated that the property is an important area for waterfowl due to grasslands and low grasslands.

It is also a destination for campers, with 120 electric campsites.

A park brochure says the park’s history dates back to the 1950s when residents of Henry County began talking about having a recreation facility near their homes. The Big Blue Recreation Area was created and sold to the State of Indiana in 1988.

Located about 17 miles southwest of Crawfordsville, this park is a favorite for hikers and canoeists.

The history of the park dates back to Native Americans who lived among the forest, ravines, and cliffs along Sugar Creek.

A park brochure states that there are many legends surrounding the origin of the park’s name. These stories include the illusion of deep shadows under the forest canopy and the eerie feeling being the reason for its first name, The Shades of Death. Other stories range from being a Native American stronghold and the legend of an early settler being killed to a young settler’s wife burying an ax in her husband’s skull.

Regardless of where the name came from, the name was dropped at The Shades because the DNR said the original name was considered disreputable.

Located along the Eel and White River watersheds in Putnam and Owen counties, this sprawling 8,075-acre park was built throughout the 1940s as the first flood control lake project in the district of Louisville.

The Lieber State Recreation Area was once populated by the Miamis, Shawnees and Potawatomi before it was sold to the US government when the 10 o’clock treaty line was drawn.

Today, the park features a state-of-the-art aquatics center with a zero-entry pool, water bubbles, and a tornado slide. There are also shelters, a volleyball court and a playground.

Other possibilities include hiking trails, boat access and camping.

Camping – View maps of campgrounds under the MAPS tab

Located in Spencer, Indiana, the state’s first state park is highlighted by a limestone canyon, flowing creek, and scenic waterfalls.

The park was founded in 1916 after the death of Frederick Denkewalter, a physician who built a sanitarium on the current Canyon Inn site. Upon his death in 1914, his estate was put up for sale, and Owen County and the State of Indiana purchased the land to maintain it in its park-like setting.

The park expanded over the years as the state acquired surrounding farms and properties as they came up for sale. A brochure for the park indicates that the majority of improvements to the park took place in the 1930s when the Civilian Conservation Corps was in the park. The organization built most of the shelters, the stone bridge and the fire tower.

A limestone quarry within the park boundary provided limestone for the Indianapolis Statehouse. Today the park is a combination of history in a modern setting.

Visitors visiting the park can attend cultural events in the park’s amphitheater or attend several special events held in the park each year.

The best weekend ideas in Southeast Asia in June