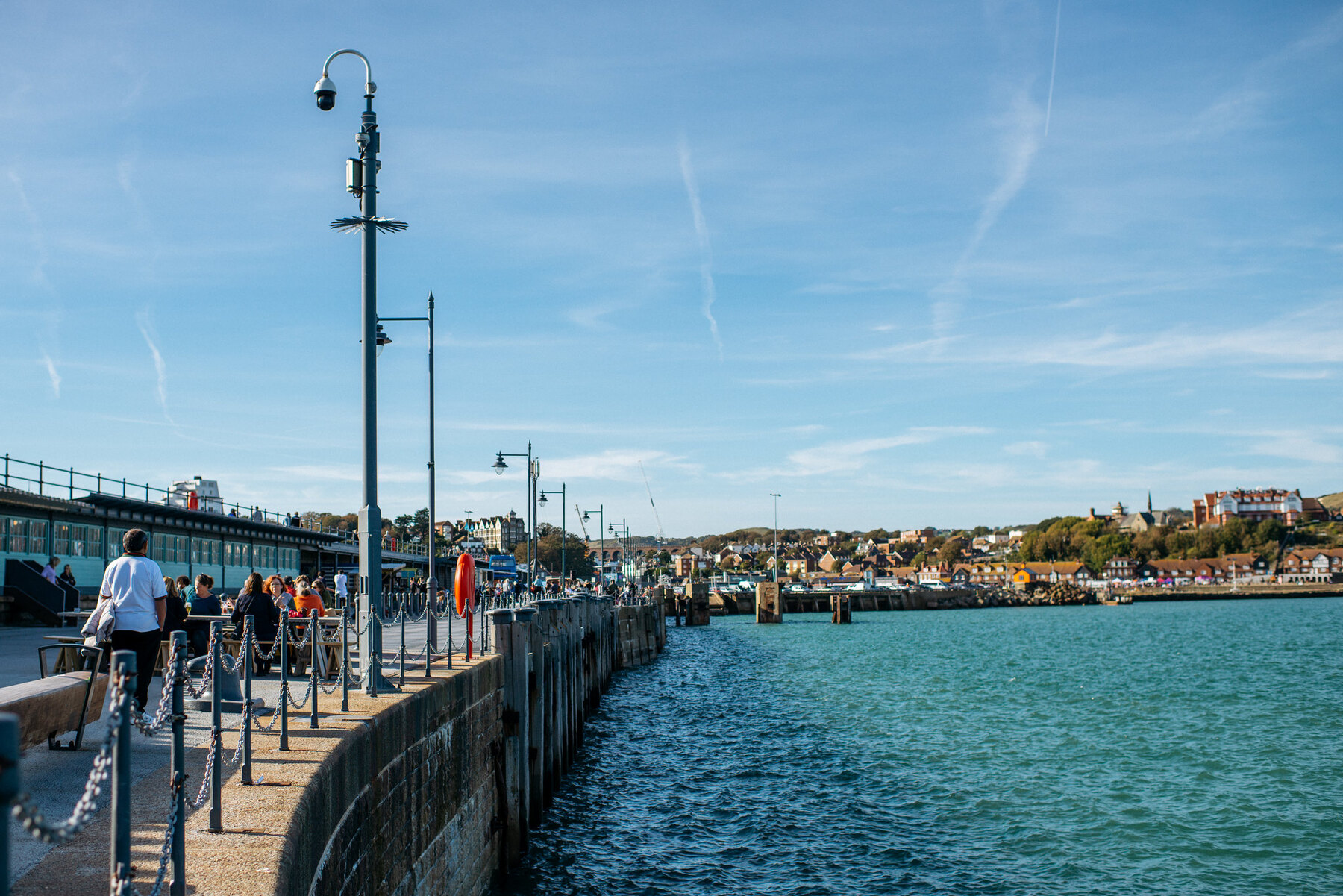 The town of Folkestone in Kent is blessed by its geography: the North Downs protect the rear of the town; an undulating strip of pebble and sandy beaches is bisected by a picturesque harbor at East Wear Bay; while to the west, a lush park offers views of the sea and south-facing cliffs over France.

What to see and do in Folkestone

Before heading to the beaches and harbour, head to The Bayle, one of the oldest parts of Folkestone. To reach it, head to the eastern end of Sandgate Road; The town’s main commercial thoroughfare may be far from inspiring, but along it glimpses of Folkestone’s illustrious past appear in buildings such as Folca, built in the 1930s as the grand Bobbies store.

At the junction with Guildhall Street is the well-presented Folkestone Museum, which occupies part of the handsome Town Hall which dates back to 1861. The eclectic collection, over two floors, ranges from prehistoric fossils to a Victorian painted silk parasol. A highlight is the canvas from 1915 Landing of Belgian refugees by Fredo Franzoni, depicting Folkestonians opening their arms to First World War refugees. In 2019, some 300 locals gathered at the port to recreate the image as a large-scale photograph, also part of the museum’s collection, as a demonstration of the city’s continued welcome for those fleeing the conflicts and persecutions.

On the walls of the district, information panels installed by the association of local residents, make it possible to better understand the history of Bayle.

A set of stone steps from the Bayle connects directly to the steeply sloping, cobbled Old High Street – one side of a rough triangle bounded by Rendezvous Street and Tontine Street which makes up the Creative Quarter. Ground zero of Folkestone’s embrace of the creative industries over the past two decades, many of the area’s brightly colored buildings are let to artists, craftspeople and small businesses. Alongside artist studios like Stables, small galleries like CT20, and quirky, boundary-pushing art venues like DIY4FOLKE are cafes, bars, and independent boutiques. There are also plenty of public artworks including Banksy art lover along the Old High Street, on the wall next to the Folklore bar.

At the top of the nearby park, where it joins the Old High Street, look for the Pocket Gallery on top of a blue-painted pole in the Community Garden; the exhibitions in this small space change every three weeks. On a much more monumental scale is F51, the world’s first multi-storey skateboard park with facilities also for BMX, climbing, bouldering and boxing, as well as a café. It’s an extraordinary building, designed by Guy Hollaway Architects, wrapped in perforated aluminum panels and containing giant, suspended concrete skating balls, as well as the largest lead climbing wall in southeastern England.

The port, animated by a small flotilla of fishing and pleasure boats, is divided in two by the old railway viaduct, now converted into a flowery path leading to the Harbor Arm. Henry VIII considered building a port at Folkestone in 1541 and for several centuries the town was also a member of the Cinque Port of Dover. In 1842 the South Eastern Railway Company took over the port, subsequently building a branch line to the pier, which had been completely rebuilt in concrete and granite in 1904.

This quarter-mile-long extension into the sea is the Harbor Arm which, in its contemporary iteration, has become a place where Folkestonians come to eat, drink, fish, watch live music and movies, watch events and stroll to the lighthouse at its end. , also the location of a champagne bar.

Winding west along the shingle beach from Harbor Arm, a path made of reclaimed wooden railway ties leads to the award-winning Lower Leas Coastal Park. Containing a leafy amphitheater and a stunning children’s playground featuring a wooden pirate ship, a giant spider and zip lines, this lush park with winding paths winds down the hillside to pebble beaches sheltered by granite groynes.

The Lower Leas runs parallel to the Upper Leas promenade, laid out in 1843 by Decimus Burton, the designer of Hyde Park and the buildings at Kew Gardens. The two are linked by steps and paths, including the gently sloping Zig Zag Path which starts near Leas Bandstand, where concerts are held during the summer months. A listed structure, the path is a very believable replica of natural cliff faces and caves, made from waste material coated with a special cement called Pulhamite, named after its creator James Pulham.

Beyond the eastern head of the harbor is Sunny Sands, Folkestone’s only real sandy beach, overlooked by Cornelia Parker’s The Folkestone Mermaid, a bronze sculpture by local resident Georgina Baker. Steps up the hill at the easternmost end of the beach lead to East Cliff, a grassy promontory with great harbor views. The squat round structure atop Copt Hill is one of 16 of 27 remaining Martello towers built along the south Kent coast in the early 19th century as defensive forts when fears of invasion by Napoleon were at their peak. Folkestone has three such towers (four if you count the ruined one at the western end of The Leas) with the first two, also in the East Cliff area, converted into private homes.

A pitch-and-putt golf course surrounds the tower and there are also public tennis courts. Nearby archaeological digs have unearthed remains dating back as far as 10,000 BC, with the most significant find being that of a large Roman villa built around 100 AD. The remains of the villa have been grassed over, but a selection of finds from the site are on display in Folkestone Museum.

Accessed by a narrow hillside road that deviates from Wear Bay Road, the Warren is Folkestone’s beautiful wilderness frontier. Just under two miles long and covering almost 740 acres, this undulating undercliff, rich in plants and wildlife, tumbles onto a mostly sandy beach littered with fossils. It is a landscape formed by landslides, caused by powerful geological forces acting on the soft, erodible bedrock of Lower Greensand and Gault Clay, which is covered in chalk.

The most notable landslide of recent years was that of 1915, which was so destructive that it closed the railway line between Folkestone and Dover until 1919. Engineering works to mitigate erosion were completed in the mid-1950s, creating a boardwalk, seawall, and wide concrete skirt along Warren’s shoreline.