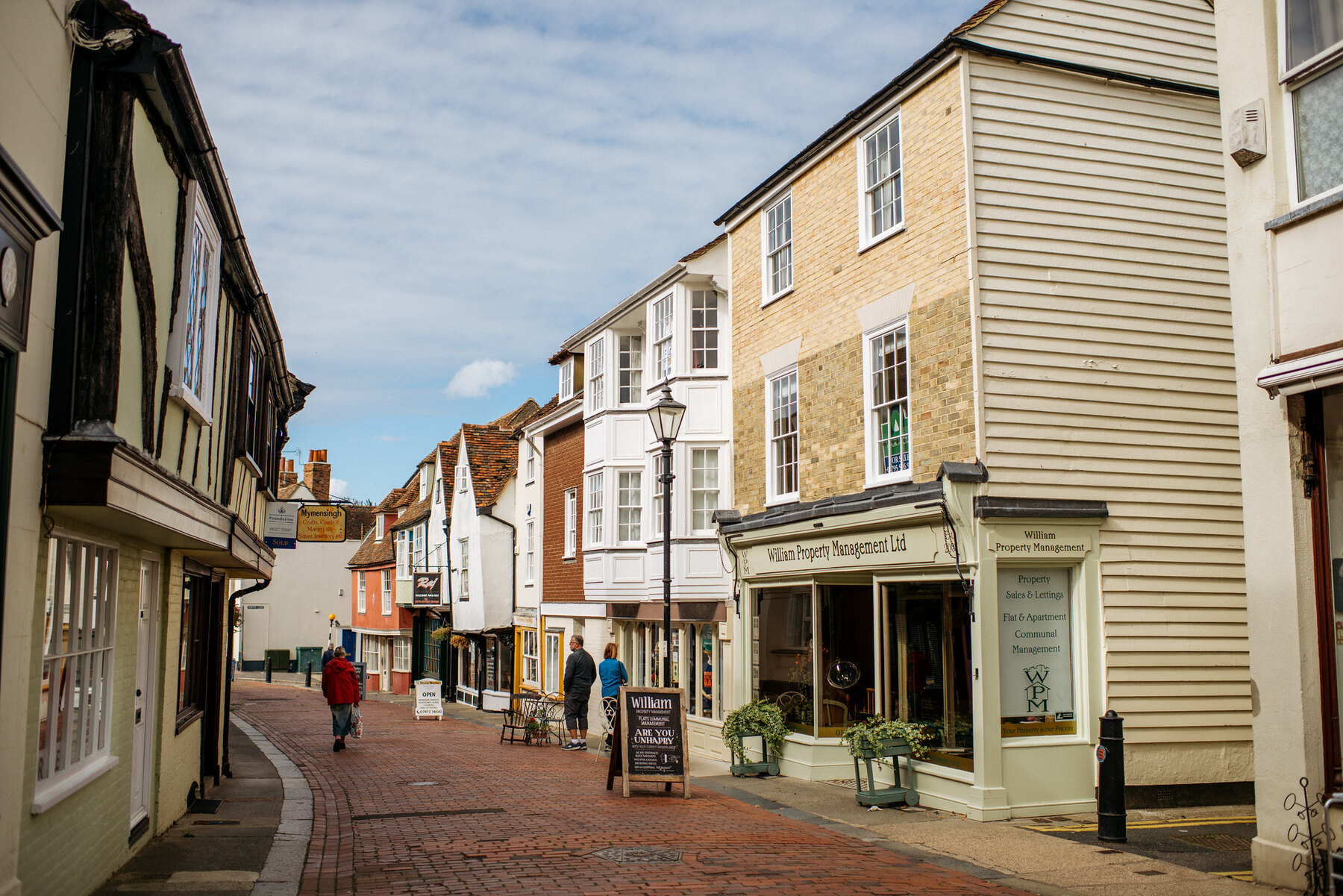 Home to one of the UK’s largest architectural conservation areas, Faversham owes its long prosperity to its sheltered position on a creek that winds inland from the Swale. Bricks, grain and gunpowder were all shipped from the port here and countless ships were built in its shipyards.

Meaning ‘metalworkers’ village’, Faversham was a royal town in Anglo-Saxon times and its market – one of the oldest in England – is mentioned in the Domesday Book of 1086. In 1148 King Stephen founded an abbey that rivaled those of Canterbury and Rochester. However, the abbey was destroyed during the Reformation, and with it the tombs of King Stephen, Queen Mathilde and their eldest son Eustace.

With over 400 intact listed buildings, Faversham remains a visual feast in Kent that is great to explore on foot. It also has a scrumptious food and drink scene, including England’s oldest brewery, and will appeal to those who enjoy rummaging in antique shops and street markets.

For a better appreciation of Faversham’s rich history and pointers to all the interesting things about the town, start your explorations at the Fleur de Lis museum. About a five-minute walk from the station, the fascinating artifact-filled exhibits are housed inside a 15th-century building that was once a pub.

At the end of Preston Street turn left into Market Place, at the top of which stands the mint green guild house. The ground floor, with its wooden archways and octagonal columns, has been used by market traders for over 500 years. The upper part of the building, including a clock tower and a cupola, dates from 1814 when the hall was rebuilt after a fire.

Officially founded in 1698, but with roots dating back to the medieval abbey brewery in Faversham, neam shepherd is a cornerstone of the city’s economy, producing over 60 million pints of Kentish ales, lagers and ciders a year. The starting point for brewery tours is the Shepherd Neame Visitor Center which occupies a beautifully restored medieval building with wooden beams at the Court Street end of Market Place. The tours, which last around 80 minutes, take participants through all the brewery processes and end with an expert-led tasting of six beers. Most Fridays and the second Wednesday of the month, an evening guided tour of the brewery is combined with a two-course meal in the Visitor Center Bar. Come wear covered flats as you walk through a working brewery and over cobblestones and slippery surfaces.

At the junction with Quay Lane, Court Street becomes Abbey Street, which – as its name suggests – once led to the medieval Abbey of Faversham. Many beautiful heritage buildings line this street, including, at number 80, Arden’s House. What was once the outer gate and guesthouse of the abbey is named after Thomas Arden; a plaque shows how this former mayor of Faversham was murdered in the house in 1551, victim of a plot fomented by his unfaithful wife and her lover. The events inspired the play Arden of Faversham said to have been written by Shakespeare.

The grounds of the abbey once extended over eight acres, west to Faversham Creek and south to St Mary of Charity Parish Church. Although tucked away from the main street, you cannot miss this grand church due to its late 18th century corona spire, which rises above the roofline of Faversham. Inside, a unique feature is the octagonal pillar in the northeast corner of the nave which has been painted with an early 14th-century mural depicting ten scenes from the life of Christ.

In the south chapel of the church is an ornately carved but unnamed tomb, which some believe contains the bones of King Stephen. On the edge of the churchyard is the organically managed community garden Abbey Physic, which offers gardening and healthy eating lessons. This walled garden is a serene place to enjoy flowers, plants and wildlife.