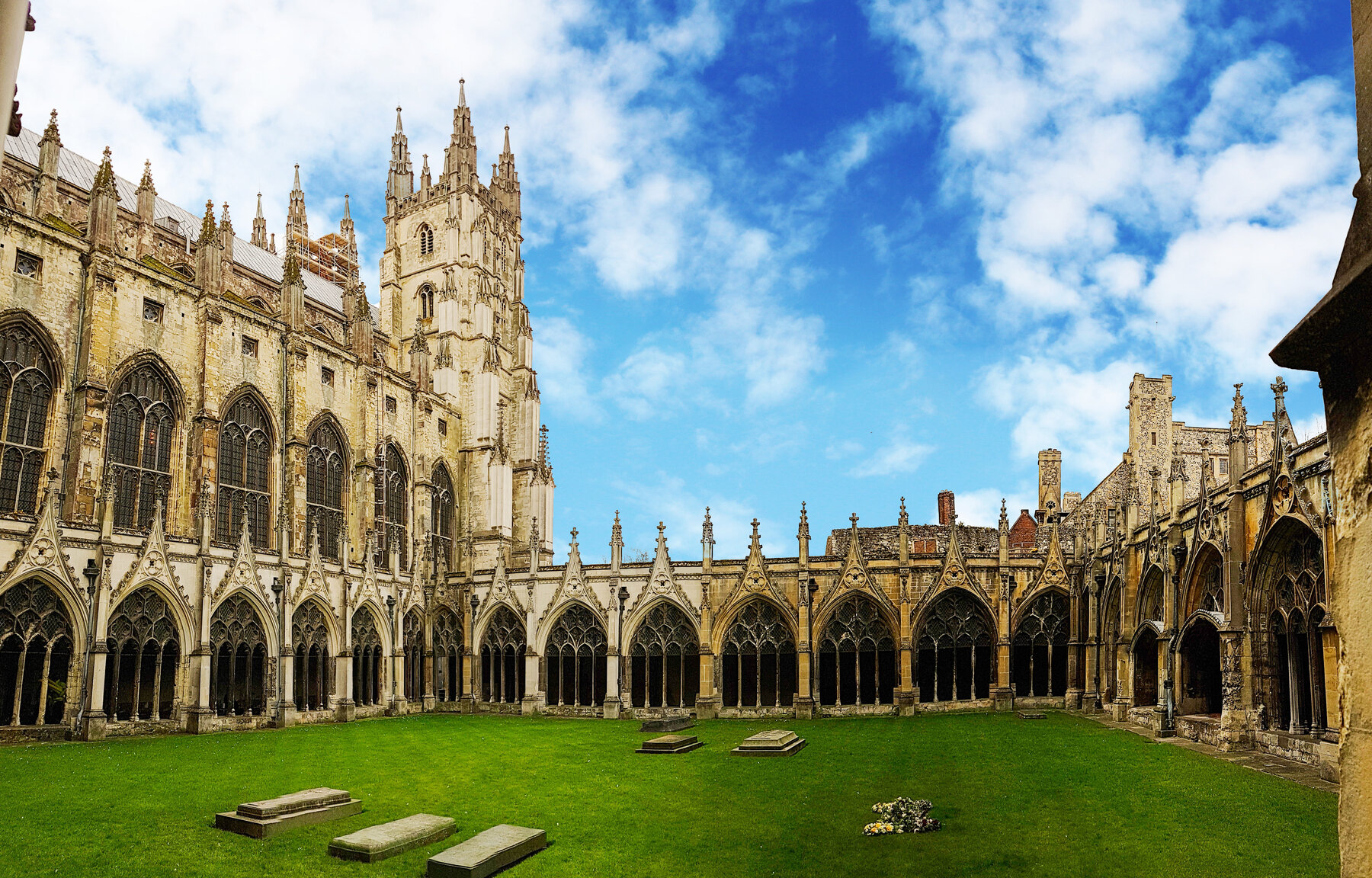 Nestled near the North Downs and crossed by the River Stour, Canterbury is a city with many stories to tell. The 250ft tower of the cathedral, the mother church of the Church of England, can be seen for miles across Kent, above the treeline, rooftops and partially intact Norman castle wall from the city. This stone beacon has guided pilgrims and visitors to “British Rome” for centuries.

Inside the city walls there are fascinating little museums and lovely gardens to relax in. There are punting trips on the Stour which gently undulates along languid, shady canals. Or you can wander through narrow, traffic-free streets lined with medieval houses with exposed beams, where you might feel like you’ve walked through a crack in time. Turn the corner and you’re back in a bustling, youthful college town with all the essentials of modern city life, including a vibrant food scene.

Originally named Christ Church and part of a monastic community, England’s first cathedral has been a sacred place of Christian worship for over 1,400 years. It was on the pilgrimage route to Rome soon after it was founded in the early 7th century by Saint Augustine, the Benedictine monk responsible for reintroducing Christianity to Britain. Much of the main building was rebuilt between 1070 and 1077 during the time of Norman Archbishop Lanfranc, replacing the old Saxon church destroyed by fire.

After the grisly murder of 1170 that made Archbishop Thomas Becket a saint, pilgrims from all over Europe began to flock to Canterbury. Becket’s sanctuary was destroyed during the Reformation, but this loss does not detract from the cathedral’s grand architecture and other important tombs, including those of Edward the Black Prince, Henry IV and his wife Joan of Navarre. The cathedral is the seat of the Anglican leader, the Archbishop of Canterbury, and the site of his investiture.

There is a new visitor center, including a free viewing gallery, exhibit area, and community studio. Inside the cathedral there are also two new exhibits of treasures from the church’s extensive collection. Don’t miss Gate of the Church of Christthe impressive south west porchthe impressive Nave and st Saint Martin’s Church (the oldest part of the World Heritage Site).

A visit to this underground museum will give you a vivid sense of the ancient Roman city on which modern Canterbury rests. In 1886, workers digging a drainage system discovered a mosaic on the ground, 8 feet below street level and thought to date back to 300 AD. In the aftermath of World War II bombing, further excavation of the site around Longmarket revealed more geometric and floral pavements and the remains of a well-to-do Roman townhouse, heated by a hypocaust (an underfloor heating system ).

Left in situ, these finds are the centerpiece of the Canterbury Roman Museum which features many other archaeological finds from this site and other sites around the city, including a magnificent collection of Roman glass and pottery.

The narrow, cobbled medieval streets of Butchery Lane and Longmarket branch off into the High Street. Stretching on a northwest-southeast axis between St George’ Gate and Westgate, this pedestrian thoroughfare is the commercial backbone of Canterbury, lined mostly with shops, restaurants and cafes. Distinctly contemporary at its southern end, where you’ll find Whitefriars Shopping Center and other modern buildings, it offers a more diverse historic character the closer you get to Westgate.

Among Canterbury’s superb stock of heritage architecture, a personal favorite is The Beaney House of Art & Knowledge. This museum, art gallery, library and tourist information center is named after the building’s Victorian benefactor, Dr. James George Beaney. Coming from humble beginnings, Beaney made his fortune in Australia and left money in his will for a “workers institute” to be built in his home town of Canterbury. This magnificent building, with its elaborate facade of faux Tudor brick and terracotta, opened in 1898. The sensitively executed modern extension to the rear contains the library, visitor information center and reception areas. temporary exhibition.

Rather than a single street, the King’s Mile covers a series of contiguous and adjoining streets east of the High Street and north of the Cathedral. It is a picturesque district; at its heart is Palace Street, which is dotted with a good range of independent shops, cafes, bars and restaurants.

Corner of Palace Street and King Street stalls Wobbly house, a comical half-timbered building from the early 17th century, now home to the charity Catching Lives, a second-hand bookstore. Alterations to an internal chimney are thought to have originally caused the structure to slide sideways, and the house is thought to have inspired a description of an unbalanced property in Dickens. David Copperfield (the quotation is inscribed on the facade of the building). Although it looks like it could tip over at any second, the building has long been stabilized inside by a steel frame.

Opposite, at the bottom of The Borough, is a stone doorway opening into the section of the cathedral grounds occupied by The King’s School. England’s oldest public school dates back to the founding of the cathedral and has had a royal charter since 1541. Playwright Christopher ‘Kit’ Marlow was a student there, along with William Harvey, who discovered the circulation of blood, and the distinguished Tudor gardener John Tradescant. More recent Old King’s Scholars include actor Orlando Bloom and author Michael Morpurgo.

An excellent elevated view of Canterbury can be obtained from the ramparts atop the 60ft high towers of Westgate. The only intact survivor of the original seven city gates, Westgate is also England’s largest medieval gate, built around 1380 as an additional defense for the city during the Hundred Years’ War. Originally approached by a drawbridge, the 19th century gate and connecting buildings at 1 Pound Lane later served as a prison and police station.

The history of the complex is explained in a small museum inside the gate, which is accessed through the Pound Kitchen & Bar which now occupies the former police buildings. A fun way to experience the door is to sign up to play one of the three Escape Room games here – full details are on the website.

The garden’s most extraordinary feature is a ridiculously chubby oriental plane tree believed to be over 200 years old. A lovely walk and cycle route through the gardens and along the Stour to the village of Chartham, three miles to the south-west.

Walk five minutes from Westgate to the corner of London Road and St Dunstan’s Street to find this modest-looking church named after a 10th-century Archbishop of Canterbury. Its most famous item – the remains of Sir Thomas More’s head – is buried in a lead coffin in an underground vault. It was from St Dunstan’s that Henry II began his barefoot march to Canterbury Cathedral on July 12, 1174, the first step in his public penance for the murder of Thomas Becket. This made the church an important point of call on later medieval pilgrims’ journeys to the cathedral.

On your way to the church, note the Roper Gate on the north side of St Dunstan’s Street. This fine example of decorative Tudor brickwork was once the entrance to the long-demolished 16th century Place House, which housed William and Margaret Roper.

Even your grandma will love these travel ideas: here’s our multi-generational vacation guide